The WeWriwa page. Check it out. A whole batch of authors, sharing snippets of their work. Visit their blogs, you won’t be disappointed.

Hmmm, this week is a terse conversation between Shannon, Hunter, and a marauding Nomad called Ryan. A WIP, Bloodlines will be released in the Autumn, 2017. Book 3 of The Wildblood series. Because my characters have some ideas of their own suddenly appearing on the page, I’m not certain if there will be a Book 4. It’s a possibility now. I’ll let you know, when I know.

“Are you calling me riff-raff?” Ryan asked, skeptical.

“You were waving a shotgun at a bunch of old men playing cards on the porch. No, nice people do shit like that, all the time.” She was sarcastic but the fury, the anger, was gone.

It suddenly occurred to Hunter, he didn’t like this Nomad smiling at her. He cleared his throat and stood. Ryan was taller and broader. He didn’t care. “Are we shooting each other, or having supper?”

It’s never boring, when you’re hanging out with the genetically altered. It’s not particularly safe, either. My humans and Altered are living on an Earth, a generation after civilization snuffed itself out. The bad news is – some things never change. The good news is – humans are resilient.

The Vista: Book 1 of The Wildblood
What happens, after the end of civilization?

Renegades: Book 2 of The Wildblood
Uncontrollable. Unpredictable. Dangerous. The Wildblood.
Now, Team Three know what they are.

99¢ always.
Before Team Three, there was The Blackout.
Backlash, prequel to The Wildblood

All are available in paperback and eBooks – http://www.topaz08.com

The WeWriwa page. Check it out.

This week, a bit of a conversation between Mac and Ballentyne, his 2nd in command, in Cody. Sometimes, we all need reminded, they survived WW3.

“The purpose of Cody has always been to protect The Vista. I don’t see that changing, but we can grow here, we can be safe here, we can do this.”

“You had something cooking, when you petitioned Command to get separation from The Vista,” Ballentyne said. “I just didn’t know what.”

“That happened as soon as we got here.”

“Barely five months ago. How long have you known about The Sixth, really?”

“We’ve known for years, someone was watching us – maybe it was them, or Skolkovo. Maybe it’s a group we haven’t crossed paths with, because we’ve been blind until recently. There could be a million people, out in the east.”

“There’s not,” Ballentyne said after a moment.

Yep, things are about to get interesting for them. With a little luck and some uninterrupted writing time (HA!), this will be off for its first edit in 4 weeks. Wish me luck. I’m sure I’ll have a big promo thing going, too. Check back soon for details.

Another Sunday. I’m going to kick the writing in to overdrive because I hate getting behind on my self-imposed schedule. If I disappear for a couple weekend, it’s just a couple weekends. I’ll be back.

The WeWriwa page. Check it out.

Let’s see. Shan and Hunter were having a deep conversation. You can catch that here. This is a little later in the same conversation.

“Just because Rafe said there was a Sixth on the team, doesn’t make it true.”

“He only implied it.”

“I know, I was there.” Hunter wanted to grab her, and shake her, and tell her not to let Rafe get in her head, but it was far too late for that. “You never answered my question.”

“Short answer,” she offered. “We can’t do anything about Vance, the way things are.”

“Oh, dear god,” Hunter interjected, knowing what was coming next.

“So we’re going to try and change the way things are. If the opportunity presents itself, Wade wants to attempt contacting Skolkovo.”

FYI – a tiny bit of a spoiler. Skolkovo is a Russian state where Texas used to be.

I’ve updated my covers to reflect that yes, they are part of a series. 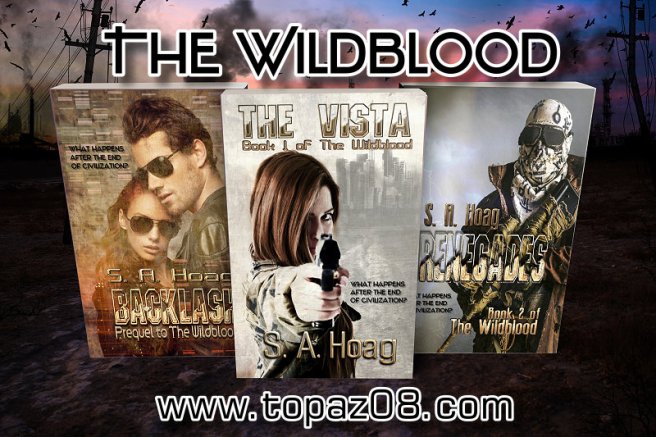 I’m baaaaaaaack. I’ve probably said that before, too. My minor characters have taken over. They burned the pitiful outline and are currently running amok. So far, I’m pretty pleased with them.

Check out the WeWriWa blog, you won’t be sorry. It’s a great place to find writers offering snippets of their work.

My few words. This from the newly-named Bloodlines: Book 3 of The Wildblood. Shannon and Hunter are off on their own, in the winter, in the wilds of Nebraska. They have different ideas of why they are there. Conversation ensues.

He stopped, regarding her carefully. “How long have we known each other, specifically?”

“Specifically, twenty-two months, and four days. We met in the middle of the night, on the road west of Depot North, mostly because you didn’t know how to drive worth a darn on a little bit of ice.” Shan stopped beside him, curious now, “Why?”

“And four days,” she added tenaciously.

“Have I ever acted, or reacted in a way that indicated I was actually stupid?” he finished.

“When are you going to tell me why we’re really out here?”

Stay tuned next week for a possible answer to that question! I’m aiming for an early autumn release date. 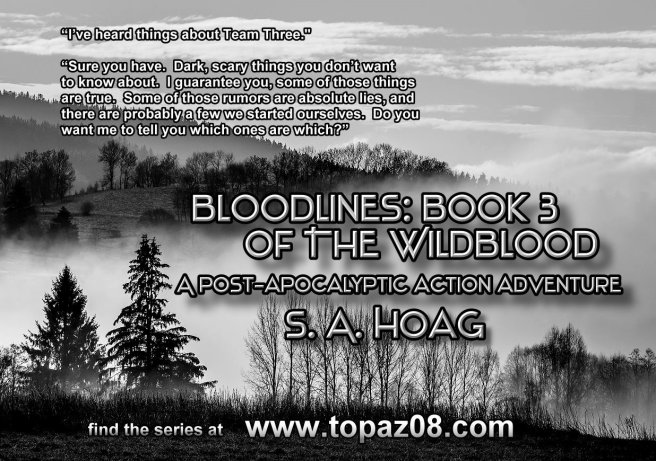