The change from car windows that crank down to windows that you operate by pushing a tiny lever was long in coming for me. My first three cars had cranks.

The reason is because I prefer to keep my eyes on the road, not searching for the proper switch. Thus, it appears, I just grab the first switch I find.

Davy is also having problems, but he has a better excuse. He just received his new truck and it’s top of the line with lots of bells and whistles. His prior truck was an ancient piece of junk that he and his dad kept going long past it’s normal death date. The piece of junk had a window crank. Easy to find and no question to which window it belongs to.

Unfortunately, he can’t find the window crank for his fancy truck, which is not good, because the policeman outside the window looks ready to shoot him.

Davy Hill goes from obscurity to fame by riding the rankest bull alive. Coming from a life of poverty, the young cowboy expects his life to change for the better now that he’s a successful professional bull-rider. Yet, with every occurrence of good luck comes an equal dose of bad. He suffers a potentially career-ending injury, a string of betrayals, and much worse. Despite all the brutal slams he takes, he keeps getting up, because he’s a bull-rider and they never give up.

A policeman reached forward and opened the door and a second later, strong arms yanked Davy from the truck and slammed him against its side.

As they roughly searched his body, Davy tried to explain. “Look, I wasn’t trying to be difficult. I just don’t know where my window handle is yet. I just got this truck a few hours ago.”

“Where’d you steal it from?” the officer holding him asked.

“It’s not stolen. My sponsor gave it to me.”

The officer laughed. “Ain’t heard that slang before. What’s a sponsor?”

“A company that pays me for wearing their name on my vest. I’m a bull rider and Dream Cars just became my sponsor.”

“Mind if we look in your truck?” another cop asked.

“No, go ahead. It’s really nice. I’ve never had anything half so fancy…which is why I didn’t know how to roll down the window. My old truck had a crank, but if this one has one, they’ve got it well hidden.”

The officer jumped out of his truck a few minutes later. “It’s clean—I mean spotless. This truck new, boy?”

Davy wondered why they kept asking him the same things over and over. “Yes, sir. That’s what I’ve been trying to tell you. I just got it a few hours ago.”

“Where’d you take it from?”

Davy sighed. Lord help him! Why wouldn’t they believe anything he said? “I didn’t take it. Look, there’s a business card in the glove box with my registration and stuff. The man on the card is the one who gave me the truck. He’ll tell you I didn’t steal it.”

Davy explained again about the sponsorship.

The second officer called over a third. “Kid says he’s a bull rider. You ever heard of a Davy Hill?”

The new cop leaned in and peered at Davy being smashed against the truck on the other side. Then he smiled. Davy hoped that was good news.

“Let him go, Joe, before you hurt his riding arm. This is the rookie who came from nowhere and is kicking everyone’s butt. He’s ridden Son of Sam, Hammer Head and Red Eyed Devil. You can call and check, but I’d sure give him a truck if I were running Dream Cars.”

Liza O’Connor lives in Denville, NJ with her dog Jess. They hike in fabulous woods every day, rain or shine, sleet or snow. Having an adventurous nature, she learned to fly small Cessnas in NJ, hang-glide in New Zealand, kayak in Pennsylvania, ski in New York, scuba dive with great white sharks in Australia, dig up dinosaur bones in Montana, sky dive in Indiana, and raft a class four river in Tasmania. She’s an avid gardener, amateur photographer, and dabbler in watercolors and graphic arts. Yet through her entire life, her first love has and always will be writing novels.

FOR MORE INFORMATION ABOUT

Check out the amazing authors sharing their creations at the WeWriWa blog. So many great books!

This snippet from Bloodlines is a polite conversation, with a lot of layers to it. Wade is letting his partners eavesdrop. Things are about to get intense.

The flood of information Wade was processing threaded back to Shannon. She offered no response, physical reaction, or otherwise. Later, she would have an opinion, she always did, it was part of her job. Further on, at their quarters, Mac merely blinked and missed what Cassie had been saying about their dry supplies being packed and ready in the storage area.

“Why are you telling me this, now?” Wade wondered.

“Because we both know, the chance of Vance letting this go, of letting you and your team move beyond his range of influence, at this juncture, are slim. That stunt you goaded him in to last week was a test of our defenses,” DeTessa explained.

“And the enemy of my enemy, is my friend.”

She peered at him. “That would be a fatal flaw in your reasoning, Cmdr. Wade.”

It’s not a dystopia, it’s not a utopia – it’s their home, and they’d do anything to protect it.

The Vista: Book 1 of The Wildblood
https://www.amazon.com/dp/B00W6R8WNM

The Vista: Book 1 of The Wildblood introduces Team Three – they’re young, ambitious, and at the forefront of a movement to discover what is beyond The Vista. They also believe they are genetically enhanced, a practice outlawed long before they were born. Venturing beyond their valley draws the attention of someone dangerous, someone that shares their past and wants to control their future, or destroy them because of what they might be.

All my books are available in paperback and eBooks – http://www.topaz08.com

Clicky the banner to find the rest of the amazing authors offering us some insight to their writing this month!

As for me – The Wildblood series is finishing up – forever? I don’t know.  I’ve got a Science Fiction Romance on deck! No, it really is. I wasn’t that surprised, but I thought the previous one would go that way. Apparently, the post-apocalypse took over and blotted out the theme, mostly.

The new one doesn’t have a real name yet, I’m using Tau Scorpii: Book 1 until I think of what to call it. Here’s what I’ve got so far. 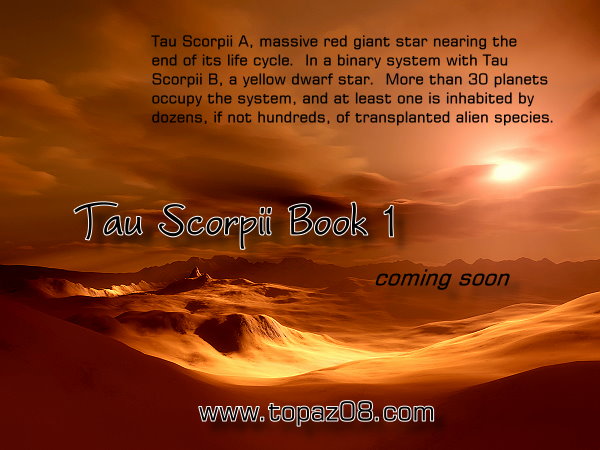 When Taryn rescues another human from a marauding band of Caeruleum, she knows they won’t be happy that their hunting party was interrupted. She also knows, the male human is as likely to be as angry and unforgiving as his former captors. On Sedna, the desert isn’t safe for aliens. The catch is, most species on the planet are alien, including humans.

Garrett is a warlord of a rival clan, and while they aren’t enemies, they aren’t allies either. That is, until they uncover a scheme that would destroy his home and make them all slaves to the merciless barbarians.

Great outline, right? No worries, I’ve had the entire plot in my brain for ages. Now I have to flesh it out. It’s more complicated, too. I like giving my readers a surprise, here and there. And I’m really happy, plus a little nervous, about crossing in to romance. I have no idea what heat level this will be. Time will tell. I’m a few thousand words in and still world-building.

It’s exciting, starting a whole new project. The Wildblood has been in the works for nearly 2 decades (that’s for another blog post), and I’m a little sad it’s over. Tau Scorpii promises new worlds, new characters, and new conflicts. I think I’ll have fun! Shooting for an early 2018 release date. Here’s a snippet, subject to editing, of course!

Taryn is about to break Garrett out of a camp of Caeruleum, who are large and barbaric hunters. Garrett is injured and Taryn isn’t a warrior, but she won’t leave him to die, even though they are strangers. He’s still human.

“Can you travel?” Taryn whispered.

“I damned well have to, because we both know what happens when they wake up,” Garrett answered, an unfamiliar accent to his voice.

“Do we need to head west, or south?” she tried not to sound overly concerned, sawing on the tough, heavy rope. Southern clans were one thing, but the western ones, there might be a concern. Some were aggressive, even with other humans. Rumor had it, they were involved in slave trading, and burning out villages on their borders. As far as she knew, they were just rumors.

“Do you have a crawler?” he countered.

Even sprawled out in the sand, both wrapped in layers of protective clothing, it was obvious he was taller than her, at least two hand spans. There would be no contest of strength, if he was uninjured. Taryn had survived by knowing her enemy, and outwitting them. Dragging him across the desert might be a problem, however.

“Unless you have a better knife than that piece of bone, we aren’t going anywhere.”

Taryn looked at the blade. Old, dull, bone. She planned on trading for a metal one, when she could afford it. What some traders wanted, she wasn’t willing to offer. For a moment, the choice didn’t seem so wise. Her job, the one she told others about, was to move around the territory, record and observe, to guide travelers. Not sneak into Caerule camps.

“I don’t have another knife.”

Yep, up a creek. Figuratively. There are no creeks on Sedna. You can keep up on my progress at my website, and find available books there. Thanks for stopping by.