Claimed by the Cyborg: a little problem with an arranged marriage…

Arranged marriages are popular in historical fiction, especially in Regency romance, but it makes for an interesting trope in science fiction romance as well.

An arranged marriage is one in which a third party, often the parents or grandparents, match the bride and groom. The couple may or may not have veto rights. A marriage in which they have no say is called a forced marriage. In some cultures, the bride and groom didn’t even meet until their wedding day. Arranged marriages were common around the world until the middle of the 18th century, and among some countries/cultures they continued to the middle of the 20th century.

Marriages are arranged for a variety of reasons: out of religious conviction, to merge family empires/businesses, as a result of limited availability of partners, to ensure homogamy (marriage between individuals who are socially, ethnically or culturally similar), to provide financial security for the bride, to provide financial income for the family (“bride price”).

The Xenians in Claimed by the Cyborg practice arranged marriage because they believe it ensures a compatible and harmonious union, which fosters social stability for their planet. Couples are matched not by relatives, but by a seer, who gets a vision of who should be mated. They don’t find out who they are supposed to be bonded with until the actual ceremony. Love does not factor into their unions.

In this scene, cyborg March speaks with two twin brothers, who have been practicing for an exhibition of sorts (no spoilers!) to be staged for Princess Julietta, the emperor’s daughter. Naimo is betrothed to Julietta. March has been searching for “Jules,” a woman from his past. He doesn’t know that Jules and Julietta are the same. In this excerpt, March is the POV character, and the first line of dialogue is his.

“I think the princess will be impressed.”

“That is my purpose—to please her and prove I am worthy to be her consort,” Naimo said.

“You’ve never met her, though.”

“I’ll see her officially for the first time at the pre-bonding ceremony dinner. We still won’t be allowed to speak to one another. I was informed of my mate’s identity so I could prepare for the duties required of me. Other than Emperor Dusan himself, she’s the most well-known person on our planet. Next year, she shall rule, and I shall assist. It is a big responsibility.”

“And a seer matched you?” March asked.

Naimo nodded. “We were paired soon after birth—before our first year.”
Right after birth? Did that mean Jules had had a mate waiting for her when she’d been on Terra? He’d known bondings were arranged, but he’d assumed that occurred when the individuals were ready to make the commitment. “Does everyone get matched when they’re infants?”

“Usually, but not always. Kur, for instance, still waits to hear.”

“One cannot question or rush the wisdom of the seer,” Kur said. “I am sure my future mate will be very special.”

Naimo shoved his brother. “I think you are so ugly the seer cannot find a mate who would accept you.”

“Who are you calling ugly? Have you ever checked in a mirror?” Kur pushed back.

March laughed. They were identical. “Neither of you has concerns about bonding with a stranger?”

“Why would we?” Kur shrugged. “The seer would not choose someone with whom we would not be compatible. Everyone has one true mate. What is the probability we would find her among all the people of our planet? Perhaps our mate lives on the night side of the great mountain. How would we find her?”

“How does the seer?”

Claimed by the Cyborg Description

March Fellows assumed he had all the time in the galaxy to pursue a relationship with Jules, an alien exchange student from Xenia, until she vanished without a trace. After years of searching, he finds his lost love on the eve of her arranged marriage.

The daughter of the Xenian emperor, Julietta never meant to fall in love with a Terran man while visiting Earth. Leaving to fulfill her responsibilities on her home planet opened up a hole in her heart that could never be filled. When March, now a cyborg, unexpectedly shows up just before she is to be bonded, she struggles to find the courage to turn him away a second time and follow through with her duty. Before she can act, the lovers are thrust into a political conspiracy that threatens the Xenian empire and their lives.

Prize Drawing
Use the cover of Claimed by the Cyborg in an Instagram photogram and enter to win a $25 Amazon gift card. Don’t delay. The deadline to enter is January 20. Get the entry requirements and rules here. 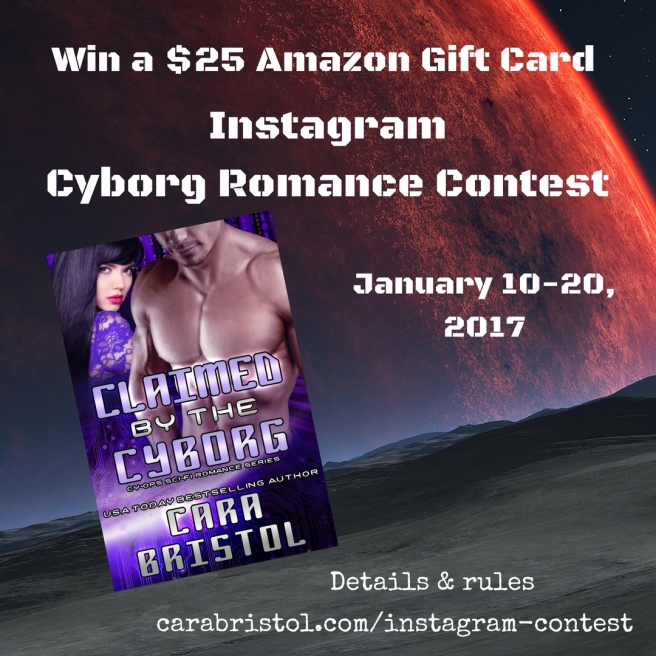 One thought on “Claimed by The Cyborg”