Book 2 of my current series, The Wildblood, is still very much a Work In Progress. I do have some parts that I love. There are also some parts where there’s not so much love, but I’ll fix that with the rewrite. This is one of the bits I love, so I thought I’d share it and maybe get some anticipation building for Renegades.

Shannon peered at the facility, trying to imagine the people that might have been there, long ago. Before she was born, before the war. After a few minutes, she sat down on the edge of the pavement, running her fingers through the dirt on the side of the road.

Standing nearby, Green waited for her, while Vance walked up and down the blacktop, never more than a few yards, stopping to check his watch occasionally. Just as he was about to tell Shan her ten minutes was nearly up, she stood, slapping her hands together to dust them off.

“I’ve never crossed a place so empty,” Shan announced. “Not so much empty as barren, void. It’s like the bombs wiped away anything that had ever happened here.” Explaining it wasn’t entirely possible, not to them. Wade would understand; they shared a psychic link and had for as long as she could remember. “Whatever secrets Rafe was hiding, he’s going to keep.”

“Do you still think he had a stockpile of nukes?” Green asked.

“I never thought he did. He said it to scare me. He said a lot of things. I couldn’t read him and he knew it.”

A few clues there about the past and a few about the future. I’ve set the release date for Feb., 2016, which really isn’t too far away. Want to catch up? The Vista; Book 1 of The Wildblood is available at several outlets.

Also, fairly new, is Backlash, the prequel novella. I was worried about a debut novel being considerably over 100,000 words and didn’t include flashbacks to this event. It makes a nice introduction to the world of The Vista. 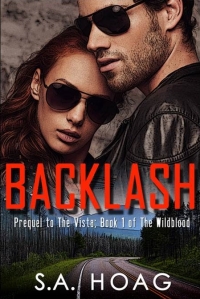